Daniel Green has been in prison since 1996, serving a life sentence for the murder of James Jordan, Michael Jordan’s dad. If you’ve listened to all episodes of Follow The Truth, you know Daniel has admitted to helping his friend Larry Demery dispose of Jordan’s body. Daniel says he did not kill James Jordan, and that he wasn’t even present when the murder happened. He has maintained his innocence of murder for 28 years and is finally getting a chance at a parole hearing.

For the first time since his incarceration began, Daniel Green has his first real chance at freedom. But what does it take to be granted parole in North Carolina, and what is the likelihood of freedom for Daniel?

WHAT IS PAROLE IN NORTH CAROLINA?

Each state makes its own rules about who’s eligible for parole, when, how often their case is reviewed and the steps required of incarcerated people on the path to getting out of prison. In North Carolina, where the murder of Michael Jordan’s dad occurred, the rules are complicated. Today, a life sentence really means life in prison because of the Structured Sentencing Act, which state lawmakers passed in 1994. In North Carolina, no person convicted of a felony is eligible for parole. People convicted of felonies that occurred before the Act of 1994, are eligible for parole.

The murder of James Jordan happened in 1993. Larry Demery and Daniel Green were found guilty and sentenced to life in prison in 1996. Since the crime occurred before the act was passed Demery and Green are eligible for parole.

We explained in episode ten that Larry Demery was granted parole in 2020. He is scheduled to be released from prison August 6th, 2024 if he doesn’t get into any trouble, and completes a program called MAPP which stands for the Mutual Agreement Parole Program. It’s essentially a series of steps the person must take in preparation for their release. Academic classes or vocational classes – things to get them ready for the big transition into the community outside the prison walls.

Larry and Daniel went to prison for the same crime, so why did Larry get the chance for parole several years before Daniel? Remember, Larry made a plea deal with the state that reduced time on his sentence for other charges he faced in addition to the Jordan murder. Daniel had to serve a longer mandatory amount of time for his additional charges since he didn’t have a deal.

Unlike what you may have seen in movies, a parole hearing in North Carolina usually does not include the incarcerated person speaking on their own behalf. Other people, including attorneys, friends, family members and others who have taken up the torch for freedom speak or write letters on behalf of the incarcerated person. They have thirty minutes to present a case for parole.

SPEAKING UP FOR DANIEL GREEN

Three people spoke on behalf of Daniel at his first parole hearing on September 21, 2021: his attorney, Chris Mumma, Rev. Dr. T. Anthony Spearman, then president of the North Carolina NAACP and Pastor Tom Jones, a minister from Robeson County, NC.

Jones has been in contact with Green for several years. “He has always, to me, maintained his innocence, and he just convinced me. And I believed every word he said,” Jones said.

Spearman learned about Daniel’s case from the Amazon IMDB-TV Original docu-series Moment of Truth, a co-production of Capitol Broadcasting Company, parent company of WRAL Studios, the producer of this podcast.

He says he and his wife were so moved by Daniel’s story, they would be willing to have Daniel live with him if he is paroled. “If they were to say, okay, we’re going to grant you this, [Daniel]  is free to come and rest with us and we will do everything to support him,” Spearman said. 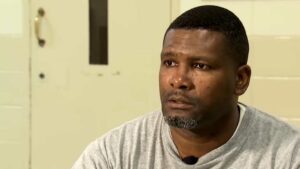 Daniel Andre Green has been in prison since 1996 for the murder of James R. Jordan, Sr.

Despite the passionate people speaking on Daniel’s behalf, being granted parole will be a challenge. One issue facing Daniel is his long list of infractions during his incarceration. Right now there are 99 infractions on his record. They mostly involve profane language, disobeying orders and fighting, which Spearman says makes sense because Daniel entered prison with a target on his back. Those infractions on his record are important since good behavior in prison is something the parole commission takes into consideration. By contrast Larry Demery has just 17 infractions on his prison record.

Also most people are not paroled the first time they’re eligible. If parole is denied, Daniel will be able to try again in three years.

In this update to Follow The Truth we go through the parole hearing process with Daniel and his team. Will the parole commission approve or deny his request?